Pontiac : noble guerrier du XVIIIe siècle
A noble warrior of the 18th century, Pontiac, chief of the Algonquian-speaking Odawa (or Ottawa) tribe that settled in Ontario, became a peacemaker later in life.
As a result of Pontiac's persistence and leadership, King George III issued the Royal Proclamation of October 7, 1763, which established the constitutional framework for negotiating treaties with the Aboriginal inhabitants of Canada. Considered an "Indian Magna Carta" or Indian Bill of Rights", the proclamation recognized the legal right of Aboriginal tribes to claim title to the lands they occupied, a concept now entrenched in Canada's constitution.
(Canada Post's description of stamp issued in 2000, Millennium Collection.) 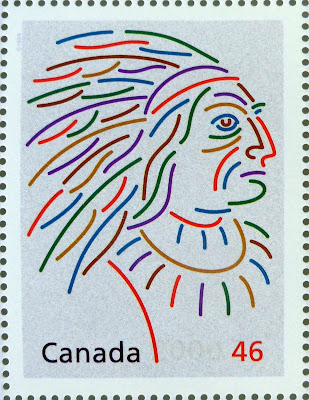