Ecological corridors next to Gatineau Park 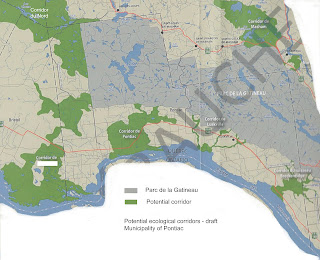 The National Capital Commission has been studying proposals to protect watercourses and forested areas adjacent to Gatineau Park from development, as these form natural corridors for movement of wildlife between Adirondack Park in the United States and Algonquin Park in Ontario. The intention is not to maintain pristine parkland, and the NCC is not planning to buy land, but hoping to persuade municipalities to protect these areas for recreation and future generations, as well as for the ecological benefits, thus making the municipality more attractive to current and future residents. (It is already against the law to cut trees in buffer strips next to streams and rivers, or in wetlands.)

Wide corridors could allow the use of ATVs and snowmobiles, if owners agree (according to the NCC).

Five of the twelve proposed corridors are at least partly within the municipality of Pontiac:

1. the Breckenridge Creek watershed (part of which already belongs to the Nature Conservancy of Canada);
2. the Luskville corridor, which consists of the forested area on the shoreline west of Baie Noire, between ch Parker and ch de la Baie, and three watercourses that enter the Ottawa in this area (Ruisseau Bradley, Crique Chartrand and Crique Alarie leading from Luskville Falls);
3. the Ottawa River shoreline from the mouth of the Quyon River downstream to Pointe Cornu (includes Plage Taber, Pontiac AirPark and Plage Stanley), and the forested areas extending north and then east to Gatineau Park, including the Mohr watercourse (the Pontiac corridor);
4. Chats Falls park and the forested area north of 5th Concession and west of ch Alexander, each side of the Quyon river, connecting to Gatineau Park north of Steele Line (most of this corridor is in the municipality of Bristol);
5. the forested areas north of Onslow Corners extending north and west from the west boundary of Gatineau Park, into Thorne and La Pêche (the North corridor).

Council feels that “these corridors will discourage development of the municipality”, and is against anything that “will be a brake on development”. It decided unanimously at its 17 January meeting to inform the NCC of its disagreement with any procedure leading to setting up ecological corridors.

What kind of development do residents of the municipality want? Wall to wall housing? Clear-cutting of forests? Tourism? Local markets? Some residents and visitors may prefer countryside, with trees and bushes on either side of winding streams and rivers, and wetlands teeming with wildlife, as well as farmland. At the moment the only protection against rampant housing development is the CPTAQ (Commission to protect farmland), which is not interested in protecting woodland unless the trees are sugar maples.

Why do residents want to live in the municipality of Pontiac? For low taxes, for the beautiful landscape, or both?