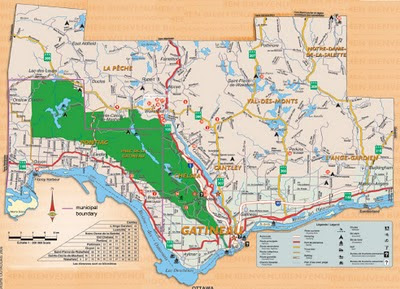 The MRC des Collines is the regional grouping (county) of seven rural and suburban municipalities around the Ville de Gatineau, formed in 1991. Its area is 2088 square km, and population over 46,000. The seven mayors represent municipalities with from 800 to over 10,000 people. The municipality of Pontiac is in the lower left (south west) of the MRC des Collines on the map above, demarcated by a purplish line; area 447 square km and population 5,700. Over 60% of Gatineau Park (green on the map) is within the municipality.

Why are there two Pontiacs?
The origin for the name is of course Chief Pontiac or Obwandiyag (1720-1769), famous for his role in an American Indian struggle against the British military occupation of the Great Lakes area.
Pontiac village was an early European settlement/logging operation located south west of Quyon, (near the Tim Horton's camp) that gave its name to the County of Pontiac when it split off from the County of Ottawa (Outaouais) in 1853.
When the townships of Eardley, Quyon, and North & South Onslow amalgamated in 1975, Pontiac was also the name chosen for the new municipality.

Don't confuse the municipality of Pontiac with "The Pontiac".
The MRC Pontiac is a regional grouping (county) of 15 municipalities, 2 villages, a township, and an unorganized territory covering a huge area of nearly 14,000 square km, with a population of just over 14,000. It is situated west and northwest of the MRC des Collines and the MRC la Vallée de la Gatineau, and has its offices in Campbell's Bay.
Eighteen mayors, each representing from 166 people (Sheenboro) to 1978 people (Mansfield et Pontefract) sit on the regional council.
From 1853, Quyon and N & S Onslow were in the county of Pontiac, and there seems to be some nostalgia for this grouping, particularly among those living in the west of the municipality of Pontiac.
The MRC Pontiac is now a very poor area, with an average yearly income per head of less than $19,000. Its seat of government at Campbell's Bay is further from all parts of the municipality of Pontiac east of Quyon, than the MRC des Collines offices in Chelsea.